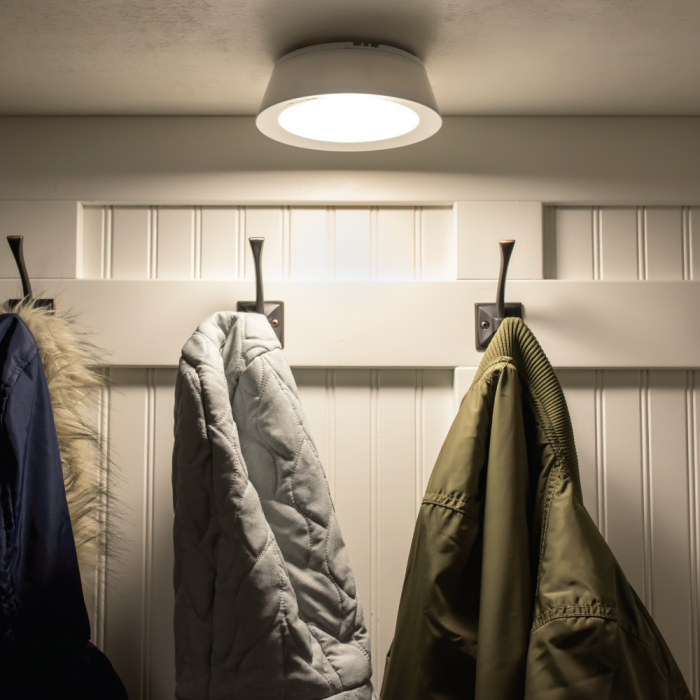 This has been one of the most satisfying home improvement projects I have done and probably one of the easiest.

A house full of dark closets that aren’t wired for lights.  Bedroom closets are more like dark caves that swallow things only to be found many years later.  Storage closets are piles of, who knows what, because if it’s not on the top of the pile it might as well be gone.

I was in Home Depot one day and saw these Mr. Beams battery powered motion sensor ceiling lights.  I sort of gave up on these types of products years ago after many failed attempts, but something in me decided to buy a few to try out.

That day I bought the 300 lumen Mr. Beams MB990 and the 200 lumen MB981.  I tested them both out in various places and much preferred the lesser MB981 in all situations.  The light of the MB990 was too harsh and didn’t seem to really provide any more useful illumination.

I installed a few in some of the closets, which took about 5 minutes a piece.  Since they were going into closets I wanted them to always turn on when motion was detected regardless of the surrounding light level.   There is a small jumper you remove to disable the light sensor.  Otherwise it might not turn on in the daytime or a well lit room.

My wife and I talked about these damn things for months and how awesome they are.   I obviously bought several more and put them in every closet and our dark entry hall/mud room.

(This is not an Advertisement and I wasn’t paid to write this.  It’s just one of those rare products that brings us silly joy, because it works so well and was so easy.)